What Happened to Alexis Patterson, Asha Degree, and Relisha Rudd?

Alexis Patterson, Asha Degree, and Relisha Rudd each went missing before she reached her 10th birthday. Could more equitable media coverage and heightened investigation into their cases have led to resolutions for their families? 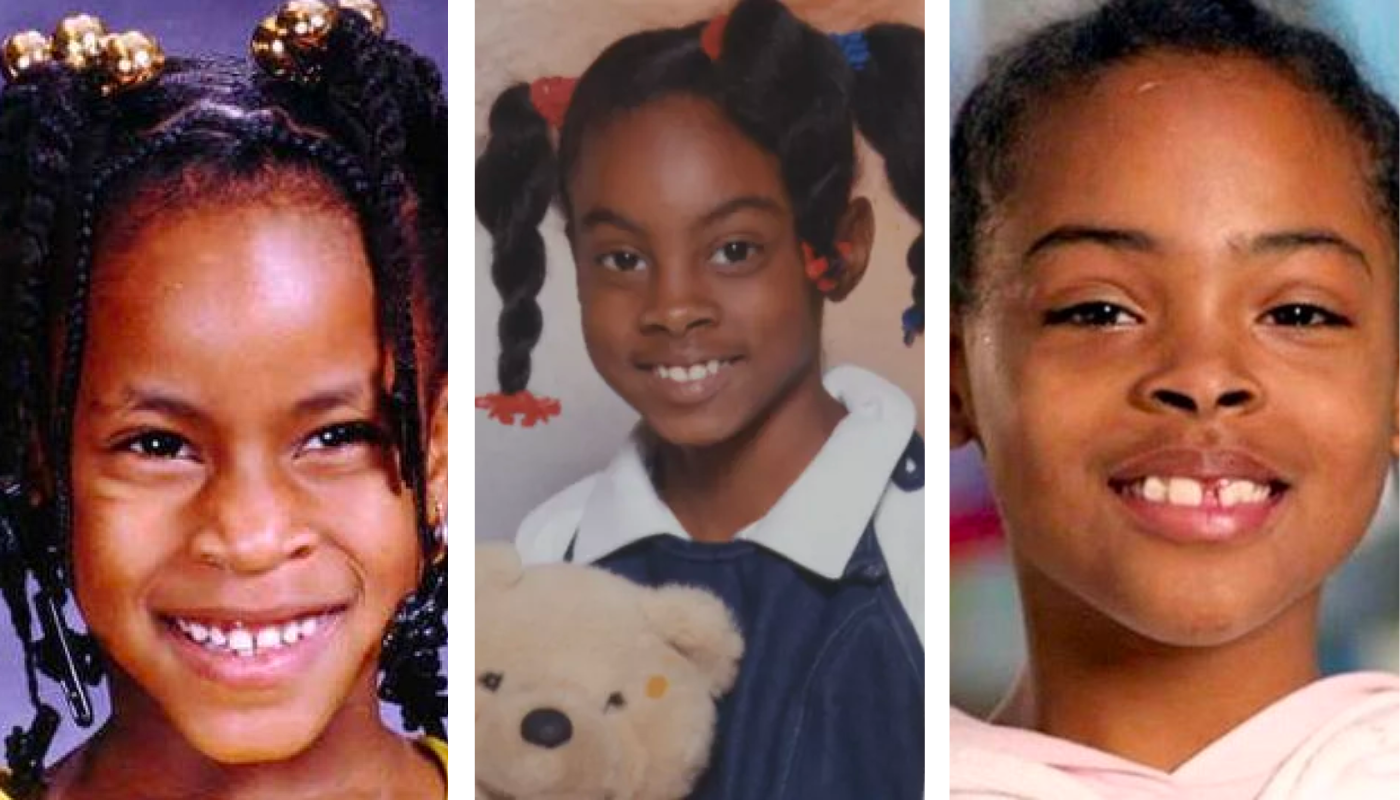 Alexis Patterson was 7 years old and in first grade at Hi-Mount Community School in Milwaukee, Wisconsin, when she went missing on May 3, 2002. Reports state that she loved the colors pink and purple, and she enjoyed roller skating. She had perfect attendance at school, where she was a spirited young girl with a big smile and bubbly personality. Friends and family sometimes called her “Lexi” or “Pie.” Before her disappearance, Alexis lived with her mother and stepfather.

Asha Degree was a 9-year-old fourth-grader at Fallston Elementary School in Shelby, North Carolina, when she went missing on February 14, 2000. Living with her parents and older brother, Asha had a good home life. She was a strong student who liked to play basketball. While she could be shy and quiet, she was also competitive and didn’t like to lose.

Relisha Rudd was 8 years old and a student at Payne Elementary School in Washington, D.C., when she went missing in early March 2014. Relisha lived with her mother and younger brothers in an apartment before they moved into a shelter. She was protective of her siblings, showing a strong maternal instinct by sometimes acting as a mother figure to them. Those who knew Relisha all loved her and described her as friendly, sweet, and everyone’s best friend.

The day Alexis, Asha, and Relisha each went missing

On the morning of May 3, 2002, Alexis’s stepfather walked her to school, where he left her after she crossed the crosswalk toward the school playground. Some reports state that witnesses saw Alexis—looking visibly upset—on the playground that morning and later in the day, but no one remembers seeing her in class on May 3. And even though Alexis did not typically miss school (as evidenced by her perfect attendance record), no one from the school notified her family that she did not show up that day.

When Alexis did not return home from school at her usual time, her mother checked with the school and learned that Alexis had been absent. Then her mother notified authorities to report Alexis missing.

At the time of her disappearance, Alexis’s physical description was as follows according to The Charley Project: Black female, 7 years old, 3’8” tall, 42 pounds, with black hair, brown eyes, crowded teeth, dark gums, and a scar below her right eye. She is right-handed.

The day before Asha disappeared, she went to church and then spent the afternoon at a family gathering. She went to bed around 9:00 pm on February 13, 2000. Her father checked on her and her brother around 2:30 am February 14, 2000, before he also went to bed. Sometime between 2:30 and 3:30 am on February 14, Asha left her house and began walking along Highway 18. Several motorists later reported seeing her that morning, but none stopped the girl who was alone on the side of the road in the middle of the night.

When Asha’s mother woke up that morning to get the kids ready for school, she noticed at around 6:30 am that Asha was gone. After a brief search around the house and neighborhood, Asha’s parents reported her missing to the police, and a formal investigation commenced.

At the time she went missing, Asha fit this physical description according to The Charley Project: Black female, 9 years old, 4’6” tall, 60 pounds, with black hair and brown eyes. Her name is pronounced, “Ay-sha.”

On March 13, 2014, Relisha’s school contacted the local Child and Family Services Agency after Relisha reached her 10th unexcused absence. When social workers finally made contact with Relisha’s family six days later, they confirmed that the doctor who supposedly provided notes to excuse some of Relisha’s other absences was actually a janitor at the shelter where Relisha and her family were staying. At that point, Relisha had not been seen for 18 days. They feared that this janitor, Kahlil Tatum, had abducted Relisha after her mother asked Kahlil to care for her.

At the time of her disappearance, The Charley Project reports that Relisha was described as a Black female, 8 years old, 4’0” tall, 80 pounds, with black hair and brown eyes. Her nickname is “Li’l Mama.”

The police chief at the time initially believed that Alexis had run away from home due to an argument she had with her mother the morning she disappeared. Once law enforcement launched an official investigation into Alexis’s disappearance, they learned from several people that a suspicious red pickup truck had been parked near Alexis’s school for about a week prior to when she went missing. The driver of the truck never dropped anyone off or picked anyone up, and both truck and driver mysteriously disappeared around the same time Alexis did. The red truck has never officially been connected to the case, but many suspect there’s a link.

Immediately after Alexis went missing, authorities and the local community conducted extensive searches of nearby areas, but they were not able to locate Alexis. Over the years, police have received numerous tips about her possible whereabouts, including in states other than Wisconsin, but none of the leads has provided the answers needed to solve the case.

Of note, Alexis—a Black child—went missing about a month before Elizabeth Smart—a white teenager. After Elizabeth’s story hit the media, whatever coverage Alexis’s case might have otherwise received was lost in the flurry of attention given to Elizabeth’s disappearance. According to USA Today, “The fact that missing Black people command less media attention than whites has been well documented by academic researchers. Their studies have repeatedly found that cases of missing Black people, children and adults alike, are covered less often than whites and their stories don’t travel as widely through the nation’s newsrooms.”

Investigators believe Asha left her house of her own accord. Shortly after Asha went missing, multiple witnesses reported seeing a young girl walking along Highway 18 about a mile from Asha’s home around 4 am on February 14, 2000. Another tip suggested that Asha may have gotten into a green car, possibly a “1970s-model Lincoln Continental Mark-4 or a Ford Thunderbird with rust around the wheel wells.”

More than a year after Asha’s disappearance, a construction worker found her backpack buried on a job site near the same highway—but approximately 30 miles away in Burke County—from where witnesses saw her walking the night she went missing. The backpack was double-wrapped in black plastic trash bags. According to several reports, a few of the items in the backpack were not known to belong to Asha. After the discovery of the backpack, authorities suspected foul play was involved in Asha’s disappearance.

After law enforcement opened an official missing person investigation in Relisha’s case, they learned that the last known sighting of Relisha was on March 1, the same day Kahlil purchased some suspicious supplies from a home improvement store, including 42-gallon trash bags, a shovel, and lime (a chemical that can be used to speed up body decomposition).

Alexis – Alexis’s family is not currently working with law enforcement, stating that they don’t trust the police. For their part, law enforcement now believes foul play was involved in Alexis’s disappearance and is still pursuing leads as they come in. They have even left open the possibility that Alexis’s mother and stepfather were involved in some way. A few years ago, DNA ruled out a woman in Ohio who was thought to potentially be Alexis, but Alexis’s mother does not believe the test results are accurate.

Police urge community members to come forward with information about Alexis’s disappearance. They believe the case can be solved with help from those who may know what happened to Alexis back in 2002. Tips should be submitted to the Milwaukee Police Department Cold Case Unit at 414-935-7360 or Crimestoppers at 414-224-TIPS.

The FBI, Cleveland County, and North Carolina SBI continue to actively investigate Asha’s case, which remains unsolved. The area around Shelby, North Carolina, now features several billboards promoting Asha’s case and pleading with the public to come forward with any tips that may lead to locating her. Relevant information may be eligible for a $45,000 reward. Anyone with information about Asha’s disappearance should call the FBI at 704-672-6100 or the Cleveland County Sheriff’s Office at 704-484-4822.

After Kahlil’s apparent suicide, the city of Washington investigated how Relisha’s school and the Child and Family Services Agency handled the events surrounding her disappearance and concluded that the organizations couldn’t have done anything more to prevent Relisha from going missing. Relisha’s case is still open, and no one has ever been charged in connection with her disappearance. Anyone with information regarding Relisha’s case should contact the Washington, D.C., Police Department at 202-727-9099.